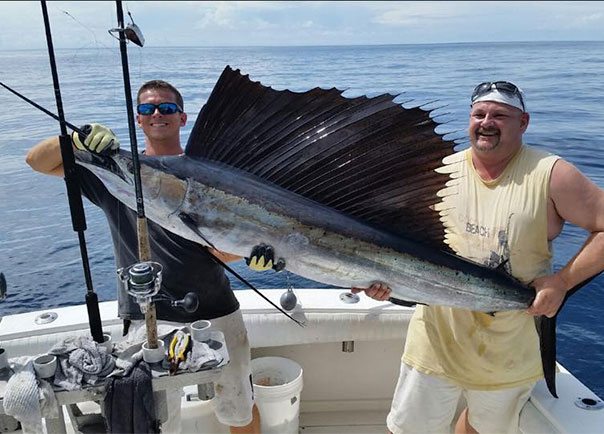 Other than being the fastest growing port in Florida, and offering fantastic Port Canaveral fishing, Port Canaveral is one of the top American cruise terminals; situated in Cape Canaveral city, one of the top angler’s destinations in the United States. Cape Canaveral, commonly referred to as the World’s Redfish capital city has the most productive fishing grounds on the Eastern Seaboard.
The region offers exceptional bottom fishing opportunities for both beginners and experienced anglers. So you can find professional anglers and fishermen fishing in the area all year long. Port and Cape Canaveral is home to several fish species, with the most common ones being:

The Most Common Types of Fish in Port and Cape Canaveral:

Red Snapper is a snapper species that is indigenous to the western parts of the Atlantic Ocean. Red Snappers inhabit several places that are associated with reefs, and it is the most common fish in Cape Canaveral fishing. This species is one of the most popular game fish in the Atlantic Ocean, and it can be found in Port Canaveral all year long.

Red Snappers are always willing to bite any bait that is dropped to the bottom of the ocean. Snappers can be found in a school of over 100 fish near the reefs in Cape Canaveral. Therefore, Anglers track them using some of the best fish finders in the market. For more information on the most reliable fish finders, check out this resource.

Mahi-mahis are surface-dwelling, ray-finned fishes common in the subtropical, tropical, and temperate waters on the planet. And Port Canaveral has some of the best Mahi-mahi fishing spots in Florida. Anglers love trolling for them or using live or chum baits to catch them.

The peak season for Mahi-mahi fishing in Cape Canaveral is from April to May when they are busy migrating north. But, anglers can still fish Mahi-mahis at Port Canaveral throughout summer. Most of the Mahi-mahi caught here are small, but quite fun to catch using spinning rods. Mahi-mahi is an excellent fish for both experienced and beginner anglers. However, the minimum acceptable catching size of Mahi-mahi is 20 inches.

Sailfish is a type of billfish that can be found in the colder regions of all the world’s seas. They are gray to blue and have a dorsal fin that is called a Sail. Sailfish fishing season in Cape Canaveral starts in fall and stretches to winter when they are migrating south. A sailfish bite during winter can be phenomenal. They are beautiful, acrobatic, and exceptional adversaries to catch on light tackles. But, Anglers can also find some sailfish during summer.

Yellowfin tuna is quite common in the pelagic waters of subtropical and tropical oceans. Tuna fishing trips in Cape Canaveral are very popular since these warm-blooded species exhibit tremendous fights. Yellowfin tuna harvesting season runs from April to June in Port Canaveral when they are migrating from the Bahamas and moving northwards. And most experienced anglers locate Yellowfin tuna by watching birds diving to catch tunas. Therefore, you can use your radar to track a flock of birds in the sea when you are looking for Yellowfin tuna.

Cobia is one of the most common fish species in this region that can be found at any time of the year. However, the best time to target them is in early spring or late winter, when they are migrating north along the east coast. The best month to catch Cobias is in March, but this specie is always looking for better water temperature. And they migrate as the sea warms up. Experienced anglers target them when the temperature is over 70 degrees Fahrenheit. That is when they start migrating northwards and the best time to catch them.

Blue and White Marlins are well-known sport fishes in the tropical regions. And Cape Canaveral provides a reliable Marlin fishing experience throughout the summer and spring months. If you want to catch a White or Blue Marlin without flying out of the United States, this destination is for you. According to Florida’s recreational fishing rules, the minimum catching size limit is 66 inches for White Marlin and 99 inches Blue Marlin.

King Mackerel is a migratory mackerel species of the Mexican Gulf and the western parts of the Atlantic Ocean. King Mackerel, commonly known as Kingfish, is a crucial species to the recreational and commercial fishing industries. Kingfish has a bluish-green back and silvery sides. King Mackerel can be seen near the beach at Port Canaveral during summer.

Swordfish, also referred to as broadbills in several nations, is a huge predatory and migratory fish. Swordfish thrives in the temperate and hot regions of the Indian, Atlantic, and Pacific Oceans. Swordfish is quite common in Cape Canaveral, and they can be found there all year long. However, due to the bad weather in winter, it’s advisable to go fishing for Swordfish in this region during summer and spring. To find an excellent spot for Swordfish, you have to sail over 50 miles offshore. So make sure the weather is warm and sunny before setting sail.

Black drum is a fish species that is closely related to seatrouts, whiting, and redfish. Black drums are quite common in the coastal waters of Florida, particularly at Cape Canaveral. The black drum found in Port Canaveral can reach a maximum weight of about 80 pounds. The black drums in Port Canaveral are among the biggest in Florida, with the smallest ones being from the Indian River and Mosquito Lagoon. Anglers looking for other types of fish can end up catching this species since they consume a wide variety of baits.

Chelsea is the editor and content creator at fishermenspond.com. She's crazy about all things fishing and spends most weekends exploring lakes in her home state of Ohio.